“That awkward moment when you can’t sleep at night and continue to change positions like a mentally challenged walrus.”

Pregnancy and sleep-disordered breathing. Is that really a thing? One more item to add to the list for women to worry about!​

Pregnancy is full of so many emotions and concerns: excitement, hope, being fulfilled, love, fear, and anxiety to name just a few. The point, however, is not to add one more reason for anxiety, but to have the ability and knowledge to provide a more restful and healthy environment for women and their little ones on the way. 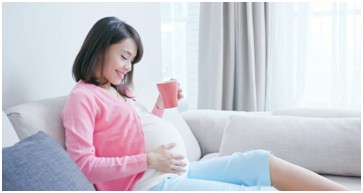 In fact, a healthier sleep with proper breathing decreases stress and anxiety. Quality sleep helps our hormones regulate better so we can be calm, think through our fears, eat healthier, and function better. As a result, expectant mothers feel more confident about this beautiful but sometimes uncertain time of their life, and the baby benefits as well.

Although we have already covered the definition of sleep-disordered breathing and sleep apnea in previous chapters, it is well worth repeating here so we can see how it affects pregnancy…

The phenomenon of sleep apnea is when the airway begins to collapse, either partially or fully, creating an obstruction in breathing. When this happens, the “fight or flight” response that we’ve mentioned before triggers a host of reactions, creating great stress on the body. Breathing gives us oxygen. A dip in oxygen levels when we are not breathing creates a spike in blood pressure which is part of that fight or flight response. As this happens over and over again during the night, the whole cardiovascular system is put in a state of distress.

For pregnant mothers this causes a very high risk of preeclampsia and pre-term delivery. These babies are twice as likely to have low birth weights and be placed in the NICU (neonatal intensive care unit). Pregnant women who might live at high altitude such as in Colorado live with chronically low oxygen levels and may already be predisposed to blood pressure disorders.

The feeling of a fight or flight response is usually not something any of us enjoy (except maybe on a roller coaster or those who like skydiving). Adrenaline and cortisol are the hormones that rush through the body to create that feeling, with cortisol being the primary stress hormone.

Expectant mothers have been under-recognized as a group at risk for apnea. Mothers need a restful sleep for themselves and their babies. However the research is clear and the prevalence of obstructive sleep apnea can be as high as 26% in the third trimester.
With this knowledge, what can be done about it? 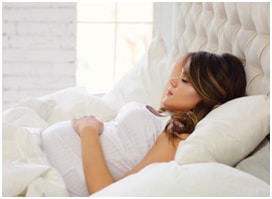 CPAP is often prescribed for sleep apnea and has been shown to be effective. It works by pushing air into the airway at whatever pressure is needed to blow open and prevent collapse of the airway that occurs during an oxygen-depleting event. CPAP works! Unfortunately, many people find it cumbersome or claustrophobic. It is hard enough to find a comfortable position during pregnancy without adding a machine to the mix!

Dental appliances also treat sleep-disordered breathing and are easy to wear and get used to. The additional bonus is that it also helps relieve the extra snoring, which often occurs during pregnancy too.​ 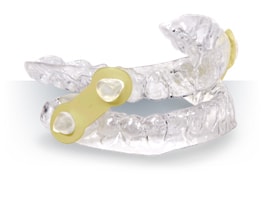 Dental appliances for sleep apnea have grown in popularity over the years and have been verified by many research studies as to their effectiveness. These appliances gently hold the lower jaw in a position that keeps the airway open, providing the restful night sleep that is so crucial especially for pregnant women. Your medical insurance carrier might even cover it!

The expectation of new life sparks a level of love and a protective role in women that is undeniable. A good night’s sleep can only enhance that miracle.

“No one else will ever know the strength of my love for you. After all, you’re the only one who knows the sound of my heart from the inside.”